It’s been a hectic week for British vacuum cleaner, seasonal and hand dryer brand Dyson. In addition to showcasing several flagship products set for release in Australia in the coming weeks, the privately-owned company has invested in an American solid state battery pioneer, unveiled its latest seasonal advance — and debut air purifier — the Pure Cool, and announced it is opening its first retail store.

Starting with the here and now, Dyson is releasing three new appliances into Australia over the coming weeks. The first is the V6 Absolute, its new flagship handstick cleaner that can convert into a handheld unit. This on-trend device features separate cleaning heads for carpets and hard floors, with the latter being a patented tactile fluffy roller that can attack both larger objects like a piece of cereal or fine dust. A mini motorised tool, combination tool and crevice tool are also included.

The hybrid stick-hand vac market has been growing rapidly in Australia as consumers look for a one-stop solution for spot cleaning in large houses or all-round cleaning in apartments and smaller premises. Dyson thinks its form factor, with the weight at the hand, is superior to models where the motor is in the cleaning head because it means you can lift up the vac to clean high places, like ceilings and the tops of curtains. Manufacturers of alternate designs have countered this, saying that having the motor and bin at the head is better because dust has to travel a shorter distance when vacuuming.

“In April, Dyson will be launching the Dyson V6 range of cordless vacuums, with Dyson V6 Absolute cordless vacuum the hero,” Dyson ANZ MD Glenn Andrew told me. “To engineer a machine that tackles both fine dust and larger debris, like Cheerios, we needed to change the way we pick-up the dirt from the floor. Using a soft roller cleaner head, Dyson engineers have radically redesigned the traditional cleaner head so that it tackles both big and small debris.”

Also new from Dyson is the next unit in its air multiplier range, the Hot + Cool Jet Focus. Combining the cooling technology first incorporated in its game-changing Air Multipliers with an element to provide heating, Dyson has created a bladeless year-round seasonal solution. Feature updates on the new Hot + Cool include a choice of focused or diffused heat, meaning whether heating for an individual or for a group, the Hot + Cool can be customised for optimal output; and automatic switching between heating and cooling functions (on previous models a user had to toggle down from high temperatures to the fan settings).

Joining the AM09 on retail shelves is Dyson’s first Humidifier (AM10). Glenn Andrew told me that this appliance not only solves the problem of homes becoming too dry, especially during winter, which can be an irritant or unhealthy for many Australians, but it is also much safer to use than rival humidifiers, about which he holds a very dim view.

“There has been little innovation in humidifiers since their conception,” he said. “Their poor design can turn conventional humidifiers into reservoirs for harmful bacteria. Atomised into the air, inhaling bacteria filled moisture is as least as dangerous as drinking it. It’s why other humidifiers can be potentially dangerous. The engineering brief was to develop a humidifier which overcame the hygiene issues of others, and which provides even room distribution.”

Andrew told me Dyson engineers achieved this by including ultraviolet technology within the humidifier to cleanse the water of 99.9 of bacteria before it is converted to mist and released into the atmosphere.

A lot is expected from the Dyson Humidifier, which will sit at a very high price point compared to other models on the market. A quick look at Harvey Norman’s website shows humidifiers with a mean price of $113. If Dyson can have the same effect on the air treatment category as it has on seasonal appliances — driving value growth through higher price points — then the sector could be vitalised from a largely replacement purchase mature market to a more dynamic, profit-driven one, similar to what Dyson has done to table fans over the past five years.

Switching from local to global Dyson news, the company this week announced its investment in Sakti3, a Michigan-based researcher and developer of solid state batteries, for the equivalent of $19 million. This comes on the back of Dyson’s 2014 multibillion dollar investment in future technologies — famously robotics — and its declaration that it will develop 100 new machines across four distinct technology portfolios by the end of the decade. Clearly Dyson believes users want more automation, more of the time, with fewer cords and less charging.

“The Sakti3 team has amazing ambitions, and their platform offers the potential for exponential performance gains that will supercharge the Dyson machines we know today.”

Solid state batteries are based on the same lithium-ion technology as the batteries seen in most smartphones and tablets, but instead of containing a liquid electrolyte, they have solid lithium electrodes. The technology is favoured by Dyson because it has a simple and cheap manufacturing process, is more environmentally friendly and, perhaps most importantly, it has the highest known energy density. 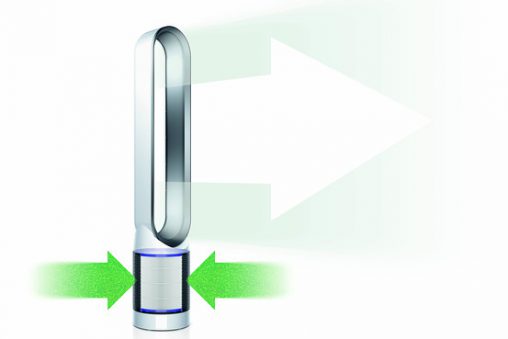 Finally, in Japan this week, Dyson unveiled the new Pure Cool air multiplier, the company’s first air purifier. Dyson is one of the few western company to have cracked the Japanese market, where consumers generally favour the famous home-grown brands like Sony, Panasonic and Sharp. Air purification is a growth appliance category in Japan, where allergies, hay fever and pollution can be a problem.

Also announced at the launch of the Pure Cool was Dyson’s first tentative steps into bricks and mortar retail. The first Dyson store will be opened in Tokyo’s well-to-do Omotesandō district, which is home to several high-concept fashion stores from the likes of Louis Vuitton, Prada and Gucci. Incidentally, this street is also the location of Tokyo’s annual St Patrick’s Day parade. It is unknown if Dyson plans on opening any retail stores in Australia; we have contacted the local team to ask them.