The confirmation of the trends towards integration and some disruptive appliance thinking were recognised at the 2014 Kitchen and Bathroom Design Institute (KBDi) Awards, recently in Brisbane. While Liam Murphy’s winning design was a seamless, built-in masterpiece, the use of appliances from several brands challenges the broad idea that premium customers want a unified brand in their kitchen.

Murphy’s company is called by Kitchens by Design and it is based in Roseville, in northern Sydney, in premises shared with Prestige Appliances Chatswood.

He winning entry for the 2014 Australian Kitchen Designer of the Year award, which is sponsored by Smeg, was for a client renovating a semi in Mosman, an affluent suburb on Sydney’s lower north shore. Murphy explained how his reputation for seamless designs helped secure him the commission.

“The clients had seen a concept that I had done before, and they wanted the kitchen to look a little bit more like furniture, rather than just being like a normal old kitchen, so we integrated everything — the cooking appliances, refrigeration, rangehoods, sinks — were all integrated behind joinery or built into the cooktops,” he said. “We put all the sinks and cooktops up against the back wall and left the island free of any appliances, and actually made it look more like a table.”

Murphy said it was the female half of the client that picked out the appliances for the winning kitchen. Unlike in previous years, when a complete kit from a single brand has been purchased, this designs features a liquorice all-sorts of kitchenware. There are V-Zug combi-steam and conventional ovens, a De Dietrich induction cooktop, integrated Liebherr refrigerators and an undermounted ASKO rangehood.

“From a design point of view, I always recommend clients don’t necessarily stick to one brand,” elaborated Murphy. “I recommend clients pick the eyes out of what’s in the marketplace and get the best out of each brand.”

“A lot of brands don’t have the full range. If someone wanted Miele, for example; it doesn’t have a shallow-enough undermounted rangehood, so I have to go with a different brand.”

All these appliances were purchased from Prestige Appliances Chatswood, an independent dealer that works in partnership with Kitchens by Designs. This showroom has existed under various proprietors since 1987 and is currently owned by Franz Josef Rupp.

“We were obviously very pleased that we’d won the New South Wales award,” Rupp said, referring to the state-based victory on the way to the national finals. “The field of entries was substantial and Liam winning the national award was mind-blowing!”

“We supplied all the appliances and it was a mixed package for that job. We are a team: Liam does the design and we do the appliances.”

Murphy is a veteran of the appliance industry, having first worked with his father, Dennis Murphy, at a dealership that was sold to Winning Appliances. After working at Winning Appliance, he then spent five years with Qasair. He said his current job as a kitchen designer has been like making a career out of a hobby. Murphy used cabinetry and joinery to hide cupboards, small appliances and storage areas in this kitchen. 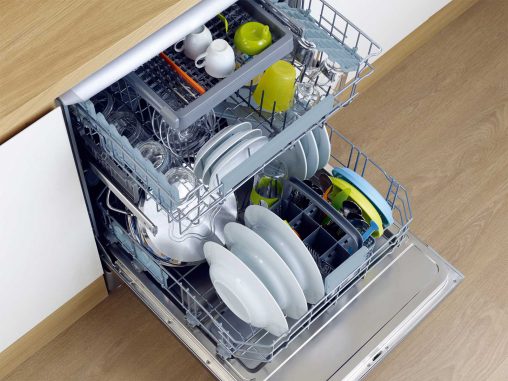