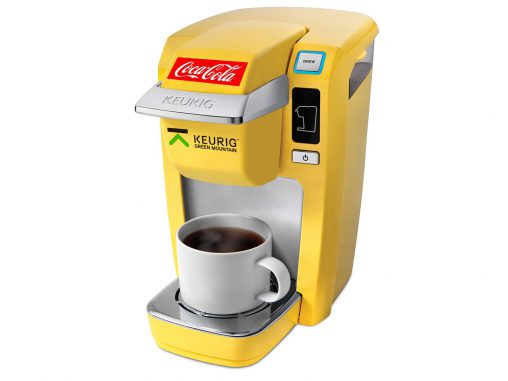 Parody: Our designers made this mock-up of a Keurig appliance with Coca-Cola branding.

Keurig Green Mountain, the coffee capsule brand that keeps Nespresso at bay in the United States with its K-Cup system, has revealed overnight its impending entry into the carbonated drinks category, traditionally dominated by SodaStream.

In a call with investors earlier this week, CEO Brian Kelley confirmed the move and revealed the company will be working with soft drinks giant Coca-Cola on a co-branded soft drink dispensing system. In addition to its eponymous and much-loved brand of cola, Coca-Cola also markets the Sprite, Monster, Fanta and Powerade, amongst many others.

“We are on track and working closely with The Coca-Cola Company to develop and perfect some of their brands for the system,” Kelley said, as quoted by Ben Bouckley for BeverageDaily.com. “We are also developing and perfecting a variety of our own new brands to be launched in our cold system and we are working with other potential co-partners.”

These discussions were preceded by Coca-Cola purchasing a 10 per cent stake in the publicly traded Keurig Green Mountain company, signalling its intent to enter more households via home carbonation, which is one of the fastest growing appliance categories both in the United States and in Australia.

Keurig Green Mountain is valued at just under $13 billion, with much of its revenue derived from selling single-cup and carafe sized portion-controlled coffee through its brewed coffee system. Brewed coffee is still the most popular type in the United States and, heretofore, Green Mountain has not made any serious attempts to crack the Australian market, of which Nespresso is the dominant capsule system player.

Should Keurig Green Mountain perfect an appliance that enabled consumers to make Coke drinks in the comfort of their own home, that would surely generate enormous interest globally, with many loyal Australian Coke drinkers lobbying the company to begin marketing it in Australia, either via a subsidiary or a licensed distributor. In the past, SodaStream has flirted with name-brand partnerships, but these have mostly been US-centric brands with little appeal in Australia, such as Kool-Aid, Ocean Spray and Country Time.

Although S0daStream has successfully rolled out its Caps single serve offer, retailers are privately fuming that the co-branded KitchenAid SodaStream drinks maker, a truly elegant and beautiful conflation of the two brands, has not been made available through local distributor Peter McInnes.

Peter McInnes has definitely received enquiries about this model from Australian dealers because they contacted Appliance Retailer to ask us to stop writing about it: our stories were generating too much interest!

Meanwhile, the long-awaited Breville/SodaStream machine, announced in June 2012, is now 8 months overdue, with no sign of an imminent release. Little is known about what to expect from this appliance, other than the official line from Breville CEO Jack Lord from the original announcement:

The home carbonation market is one of the most exciting categories in kitchen appliances today. We are delighted to join forces with SodaStream to bring together our premium design capability with their industry leading technology.

Breville was actually supposed to be the first external manufacturer to release a SodaStream appliance, according to the Israel-based soft drink company’s CEO Daniel Birnbaum — “We are proud to launch our first global ‘Powered-By SodaStream’ initiative with Breville, who represent the highest quality in lifestyle kitchen products,” he said at the time — but both KitchenAid and Samsung, with its brilliant but ultra-niche Sparkling Water refrigerators, beat it to the punch.

It all adds up to the general feeling that SodaStream is ripe for the picking, should a comprehensive and convincing offer avail itself to the Australian market.

In addition to the proposed Keurig and Coca-Cola machine, there is also Cuisinart’s Bevyz machine, unveiled in Chicago in March 2014. This unit prepares both hot and cold drinks, so it can make both a steaming hot coffee and a cool and refreshing cola, all at the touch of a button. Local distributor Sheldon & Hammond hasn’t revealed any plans to release this model in Australia but, once again, there was strong interest in it when we covered its launch.

SodaStream has had a very good run in Australia lately, and I am an unabashed fan of the system, but a little competition is good for everyone. To that end, we hope Keurig and Cuisinart will start marketing their systems in Australia soon.