Amber Technology believes three things are essential to running a successful brand distribution business: superior technical support, open communications and quality people. The company that began in 1987 after a management buy out of Rank Electronics has grown into one of the largest A/V brand houses in the country, with a northern Sydney head office complemented with satellite branches in Brisbane, Melbourne and Auckland in New Zealand.

Through all this, Amber Technology has retained a modest and, at times, quaint approach to the market. It values face-to-face customer service with its authorised dealers and happily promotes direct contact with its several offices while rivals try to hide phone numbers and emails on their websites. It’s almost an anachronism in the modern era for a technology vendor, or any company for that matter, to have a “business charter”, but Amber persists, saying it values six core principles, among them the environment, courage and win-win relationships.

Amber’s most famous consumer audio brands are Urbanears, Marshall and Onkyo. The man responsible for selling these wares into retailers is Alberto Zamudio, national sales manager for accessory products and lifestyle entertainment. Across previous stints with companies like Sony and Optus, Zamudio has covered all the bases in sales, from cold calling to territory management. He’s something of a character and his social media presence includes quotations from Oprah Winfrey, Richard Branson and, most amusingly, Oscar Wilde (“My own business always bores me to death, I prefer other people’s”).

So what are these other people telling Zamudio about the Australian audio industry?

“The market is heavily saturated with brands and it is no surprise that retailers and consumers are confused with multiple messages,” he said. “Retailers are trying to work out which brands to support, and whilst there is a need to meet a price, the brand stories and product pipeline is really what will make the difference.”

Amber’s focus in the headphone market is its Urbanears brand. Still a flegling brand out of Sweden, Urbanears distinguishes itself by only releasing two collections each year: (northern) spring/summer and autumn/winter. Each collection is available in a range of colours — bright and bold while the sun shines; earthy and moody while snow falls — including several exclusive SKUs in each release. Unlike rivals selling in the premium, $300-plus segment, Amber keeps Urbanears’ Australian RRPs in double figures so it is not beyond the realms of possibility that collectors can purchase these limited edition collections.

And because we are talking technology marketing, none of these colours have normal names; the most recent release for the northern spring/summer seasons includes Forget-Me-Not, Tomato, Julep and Citrus. Suffice to say these models stand out from the crowd in store.

The two current collections are Humlan (Swedish for bumblebee; headphones) and Kransen (Swedish for ring, as in wedding ring; earphones). Both of these models are RRP $79.95, a price point that really hits the sweet spot in the market, according to Zamudio.

“The sub-RRP $50 category has plateaued slightly, with sales trending towards the $100 price range, and interestingly enough, growth is also anticipated for products RRP $150-plus,” he said. “Consumers are seeking exceptional sound quality, comfort, function and style.”

Zamudio then raised a point that no previous Soundbite Series spokesperson has suggested: today’s consumers want-cum-need more than one pair of head/earphones. We tend to think of consumers spending a lot of money on a flash pair of headphones that they cherish and wear with pride on the morning commute, while at the office and then on the train home. The only time that they sub another pair in is for long-haul travel, when the noise-cancellers come of the cupboard for their 14 hours in the air. Zamudio says this is narrow thinking.

“In many cases, multiple sets of earphones or headphones are required to suit a wide variety of activities,” he said. “There are opportunities to up-sell with headphones as it’s likely that consumers require multiple sets, whether it’s a set of noise isolating headphones for commuting, a splash-resistant pair for outdoor activities or a  heavy duty pair for general listening pleasure.

Because of this, Zamudio advises retail sales staff to ask the consumer what they use their headphones for and also what they don’t like in their current set. “Encourage shoppers to listen to their own music with sample stock before deciding on what to purchase,” he said. 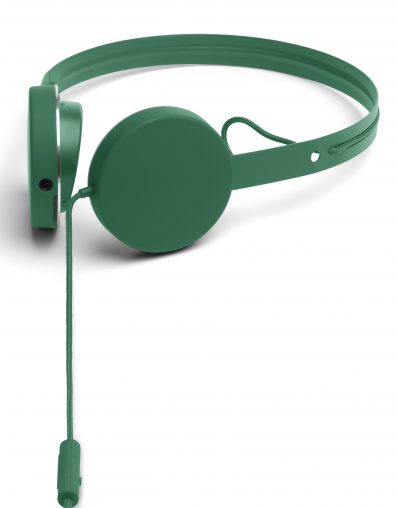 One of the main features of Urbanears Kransen (pictured here in Clover) is the removable and washable headband and earpads. RRP $79.95.

Judging by its sparse Wikipedia page, only two famous people have come from Mullumbimby, a town of just over 3,000 people in far north New South Wales, just 60 kilometres south of the Queensland border. The first is 3-time Olympic Gold medalist Petria Thomas. While Thomas found fame and fortune in the most typically Australian pursuit of all, swimming, the second, Amethyst Kelly, has chosen a considerably more unusual path. Under the stage name Iggy Azalea, Kelly has become just the third female rapper to top the US Billboard Hot 100, joining Lauryn Hill and Lil’ Kim in notching up this achievement.

In sending Fancy (performed with English singer Charli XCX) to the top of the US charts, the good people of America have added Azalea to a small but celebrated list of Australians to have reached the zenith of the international music scene: truly cracking the biggest English language market in the world. So revered is this holy grail of music production that the Hunters & Collectors’ song Holy Grail is actually about that band’s inability to make an impression in the States.

Azalea is just the 11th Australia artist to top the US chart and, for what it’s worth, only the fourth to actually be born in Australia (see list below). It is an incredible achievement that comes on the back of 5 Seconds of Summer reaching #2 on the Billboard 200 albums chart with its She Looks So Perfect EP and Gotye securing the biggest hit of 2012 with Somebody That I Used To Know. Australian music is on the world’s stage like never before.

Some would want to denigrate Azalea’s achievement, criticising her for being a bad rapper (she’s not), not writing her own music (she does), being a product of the major label system (every successful artist is) and, most ridiculous of all, not contributing to the overall success of Aussie hip hop. Criticising Iggy Azalea for not making other artists more successful is like criticising Ricky Ponting for not converting India to rugby league. It’s not her job. She has no responsibility to Hilltop Hoods or Bliss & Eso or Seth Sentry or Illy: they have all had their chance over the past decade and they have failed through lack of ability. That could change at any moment — the music-buying public is notoriously fickle and a breakout song can change everything — but none of these fundamentally regional performers have shown anything to indicate that a global hit is on the horizon, despite Triple J’s incessant cheerleading.

Azalea is already and considerably the most relevant Aussie rapper in history. Her success in the US means American music fans and critics will be more open to other local performers and she has laid a pathway for others to follow. Not all musicians seek chart success and mainstream popularity and while some will no doubt be inspired to upload catchy videos to YouTube and seek out their 15 minutes of Western Hemisphere fame, others will be content with minor chart hits, the nether regions of the Hottest 100 and touring regional centres with other similar small timers.

It is a regrettable part of the Australian psyche that the dual cancers of cultural cringe and tall poppy syndrome must always infect our self-assessment. A young performer does well so we must be ashamed of her and deride her artistry, call her irrelevant and say she is bad at what she is self-evidently good at. When she overcomes these naysayers with her craft, we then cut her down with a scythe.

Australian Artists to Top the US Billboard Hot 100

Next in our Soundbites series, we listen in with Logitech & Ultimate Ears… One Response to Soundbites 2014: Amber taking Urbanears to the street with colourful and affordable range that encourages multiple purchases