It was definitely one of the funnier moments from my six years in this chair: I was meeting Directed Electronics to chat about its latest range at Jet Cafe, at the QVB in Sydney, on a cold and wet Thursday morning in October 2012. The topic of discussion was Fanny Wang’s new range of headphones; the headline of the media release was — and I am being serious here — “Hang out with your Wang out”.

At the table with me was a rep from Directed and an account manager from the PR company. I’ll spare the marketing pro’s blushes by not naming him as what happened next was absolutely hilarious. After giving me the spiel on Fanny Wang’s brilliant new active noise cancelling headphones — and these are actual quotes: “Seriously Wang’d! Cool and classy!” — the rep reached into his suitcase full of headphone packages and, after struggling to open the box, extricated a pair of the Fanny Wang headphones. But something went wrong, a screw had become lose, and one of the cans snapped off the band, meaning the marketing rep was holding an amputated Wang in one hand, completely separated from the rest of the Fanny.

It turns out this was the tenth or twelfth media briefing he had done during a whirlwind visit to Sydney from Directed’s native Melbourne, and after opening and extracting and then replacing and closing the headphones from their packet over and over again, with journalists manhandling them in between, the headphones had lost some of their physical fortitude.

I was begged not to mention that moment and I have resisted the temptation for 18 months, and I certainly don’t bring it up now to stitch anyone up. The reason I like that story is because, even among the embarrassment, the cheeky passion for audio shines through. This was my first interaction with Directed Electronics as while it is fair to say Fanny Wang hasn’t exactly dethroned Beats as Australia’s favourite brand, Directed was prepared to be different and to speak directly to its target consumer base, youngsters, in a language it hoped they would appreciate.

Directed Australia started around 20 years ago bringing the Viper brand of car security products to Australia. Viper is owned in America by the similarly named Directed Electronics. Although the local Directed has the same name and the two companies have always had a close relationship, the local office is privately owned and is not a subsidiary. Over the ensuing 10 years, Directed Australia expanded to take on more of Directed Electronics brands and then, in the early 2000s, it began signing and licence and distribution agreements with third party brands.

As it stands, Directed Australia distributes a mixture of original audio brands like Boom, acquired brands like Polk Audio (purchased by Directed Electronics in 2006 after being independently founded in 1972), global powerhouses such as Sony and even lifestyle brands with minimal audio heritage like German sportswear company Puma.

The focus when I spoke with Michael van Raay, marketing manager at Directed Electronics, was on Nude Audio, a relatively new audio brand specialising in Bluetooth speakers started by English entrepreneur Tom Dudderidge, who had earlier established the original GEAR4 accessories brand, which fell into bankruptcy in 2013 (Directed Australia also distributes the reorganised GEAR4, now based out of Honk Kong).

Nude Audio is also headquartered in Hong Kong and runs a design studio out of San Francisco. The company mantra seems to pain Nude Audio as the anti-Beats; its website proudly declaring, “Acoustics first, celebrity endorsement second”, while Dudderidge himself says that, “In order to deliver premium products at affordable prices, our approach is all about focusing on what matters most: streamlined features and functionality, aesthetic simplicity and prioritising acoustics over marketing”.

So why choose to distribute Nude Audio’s range of personal Bluetooth speakers among the hundreds of brands looking for local distribution? And why introduce another brand into such a crowded marketplace?

“The days of the dominant Apple dock are over and people are looking for greater features from both their audio and smartphone technologies,” Van Raay replied. “Features like wirelessness, battery life, footprint, audio quality, water resistance, and app interaction are all driving the portable audio category, which continues to show excellent growth year-on-year, following in the footsteps of the massive growth seen recently in the headphone market. Brands with a strong story and deliberate market position stand a greater chance of success than those chasing volume with price.”

The Nude Audio range comprises five models including a small wired unit, three Bluetooth models of increasing size and the Studio5 hybrid wireless and Lightning dock, which is designed both as an audio solution and an attractive home furnishing, according to Van Raay. 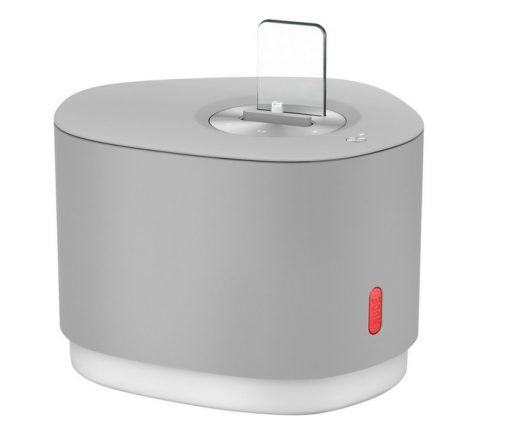 While Nude Audio targets the more price sensitive speaker customer, hitting the sweet spot in the sub-$200 bracket with all but its Studio5 unit, the Polk range is much more for the connoisseur. The new Woodbourne unit is RRP $849 and features a curved, futuristic fascia and a sylvan veneer on the top, adding a touch of naturalism, which is part of a wider home furnishings and electronics trend.

“With the Woodbourne, you can stream music and TV audio, and change the way you hear your favourite sound, with no wires, and no limits,” said Van Raay of this attractive and versatile speaker, which features six connectivity options (Airplay, Bluetooth, USB, Optical, 3.5mm and Ethernet).

Respected rival reviewer Elias Plastiras over at Good Gear Guide said that, “If you want powerful sound from a self-contained and relatively small wireless speaker system, the Polk Woodbourne is an excellent choice” in his 4-star review. Van Raay said retailers needed to read up on brands, learning their history and heritage, so they can communicate these ideals to consumers, preferably while listening to some nice tunes.

“It’s about the brand and the story that it tells, including positioning, message, heritage, style, range and price,” he said. “Never underestimate the power of demonstration and surprise, let your customers play with portable audio and test it with their smartphones and tablets to give yourself the greatest chance of a sale.”

It wouldn’t be fair to recount the earlier Fanny Wang anecdote without also getting in a plug for Directed Australia’s headphone cache. Van Raay highlights the Polk Buckle, Parrot Zik (see our earlier Soundbites edition with Parrot’s Australian MD), Sony’s deep headphone range and Puma’s sport and fashion range as attractive options for retailers to stock and consumers to purchase.

Looking at this collection as a whole and it is clear that Directed Australia, through its myriad brands, wants to target more than simply an audio enthusiast. Whereas rivals such as Bose and Sennheiser constantly reinforce their sound reproduction credentials (and they are excellent), Directed is taking a pragmatic approach to what consumers are looking for in a pair of headphones, incorporating aesthetic and design elements into its collection.

Van Raay also notes that the surge in headphone sales growth can be attributed to the high rates of incidental acquisitions of MP3 players through smartphone purchases. At the same time that many people purchase their first smartphone, they are also purchasing their first digital music player, and they are looking to make the most of the experience.

“The growth of this category continues mainly due to strong ongoing strong smartphone sales,” Van Raay said. “Lesser brands have come and gone and retailers are learning that elements including fashion, design, brand, comfort and sound quality are much more of a concern to today’s savvy headphone shopper than those looking for a cheap handsfree headset.”

Although it sometimes feels like we exist in a headphone brand vacuum and that Beats will rule supreme forever, Van Raay dismisses this sense of permanence, describing Gen Y’s propensity for brand loyalty as “fickle”.

“The headphone category will continue to be driven by the 18-to-39-year-old market, but their interest in brands combined with a fickle approach to them will continue to generate opportunities for new and well regarded products.” The Polk Buckle is designed for audiophiles and “design freaks”. RRP $349.

Next up in our Soundbites series, we analyse Apple’s acquisition of Beats…