Business confidence in Australia increased 16.7% in May and the biggest increases came from South Australia and Western Australia.

Roy Morgan CEO, Michele Levine said while the sector rebounded strongly in May, from April’s record low, it still sits in negative territory.

“For the first time this year a majority of businesses, 50.5%, said they expect their business will be better off financially this time next year. The turnaround in sentiment has been quickest in South Australia and Western Australia with both states opening up their economies at a faster rate than their counterparts in the east as community transmission of COVID-19 in these states has been non-existent for the last few weeks,” Levine said. 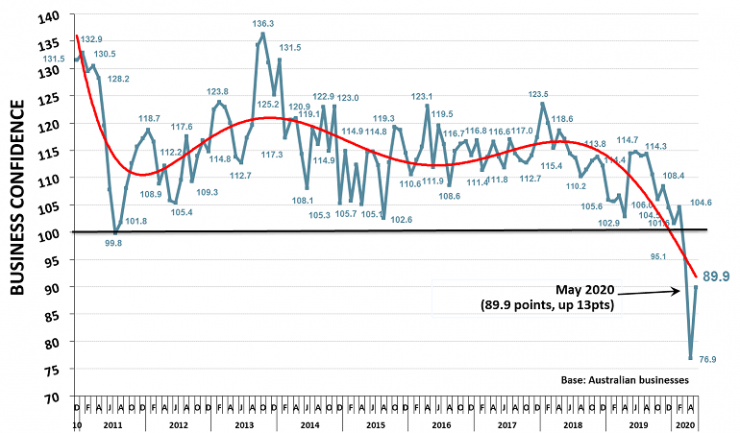 However, for the Australian economy to really get moving, it is vital for the two largest states NSW and Victoria to improve their business confidence, she said. These two states comprise about two-thirds of Australia’s $1.9 trillion economy and both continue to have low business confidence well below the neutral level of 100.

According to Levine, business confidence in Queensland and Tasmania is now lagging the rest of the nation and with both heavily reliant on domestic tourism and their borders closed these industries will continue to suffer.

“Tasmanian premier Peter Gutwein said his government will spend at least $3.1 billion on infrastructure over the next two years. The news is a welcome development that indicates the premier recognises that more needs to be done to reboot the islands economy,” she said.