After many years of toploaders dominating frontloaders in Australian laundries, last year finished with the two predominant washing machine formats neck-and-neck. Like the choice of a bagged or bagless vacuum cleaner, manual or automatic coffee machine or, in days of yore, Blu-ray or HD DVD, the nation splits itself on which style is best.

Because toploaders have been declining and frontloaders accelerating, much of the focus from suppliers has been on promoting frontloaders, which are often seen as gentler on clothes, more energy and water efficient and, with their smaller form factors, more able to squeeze into the smaller apartments we are all apparently moving into. (My Mum, incidentally, keeps her frontloader in the dishwasher space in the kitchen: a not unusual proclivity.)

Toploaders, however, are not without merit. Capacities can be much larger, wash cycles shorter and, perhaps to the chagrin of manufacturers and retailers, price points are generally lower. Toploaders also offer little conveniences like the ability to pause a cycle to throw in an errant sock.

Through 2014 there were around 784,000 washing machines sold in Australia for a total value of $585 million. The split between formats was 394,000 frontloaders and 385,000 toploaders: incredibly close when you consider the volume. The average sales price across all formats is around $750. Over the past five years, Australians have spent just under $3 billion on washing machines, with LG claiming to have captured $565 million — or around 19.5 per cent — of the that total.

Appearance preferences can be very subjective but I’ve always thought the frontloader is more streamlined and visually pleasing, while the traditional toploader can often present as a bland white box, functional though it may be. Washing machine fascias aren’t seen as important as major kitchen appliances — families don’t tend to gather, socialise and entertain in the laundry — but when a customer is in a retail store running the rule over an agitation (presumed collective noun) of washing machines, appearances do matter.

With all this circulating in the minds of marketers, not unlike clothes in a wash, it is unsurprising that LG Electronics has decided to promote its new flagship toploader range as a provider of the best of both worlds. Officially launched yesterday afternoon in Sydney, the LG SmartWasher range will carry the tagline: “The toploader that thinks it’s a frontloader”.

Martin Kim from LG explained to me that the signature technology of this range is the Inverter 6 Motion Direct Drive motor, which means these machines can be rid of the old belt-and-pulley system for a more precise, efficient and controllable application of energy to the machine. This allows for what Kim calls ‘micro-movements’ at the base of the drum — short fast jerks back and forward or longer turns — whatever is prescribed for the clothes in question. This sort of hyper control has typically been confined to the frontload market, with only a handful of other brands investing in the technology and the marketing of Direct Drive motors for toploaders.

Kim also noted that this style of motor is much quieter than a belt and pulley but he conceded there is a significant drawback: all these advantages come at a price. Appliances Online is currently selling a perfectly good belt-and-pulley 9.5-kilogram topload washer from Haier for $699 while LG’s 9.5-kilogram Direct Drive washer is RRP $1,399. Even with a discount at the counter it is a considerable leap in price points.

Life cycle estimates for washing machines range from 5 to 10 years, meaning customers entering the market today will probably not be aware of Direct Drive technology, as it wouldn’t have been in play when they were last shopping for this type of appliance.

This means LG must be very proactive in the marketing of the range. It has a complicated but, on balance, convincing technology story to tell with these washers. Marketing manager for home appliances Jennifer Osborne explained to me that LG will be conducting a 360-degree campaign to support the range, circling from consumer insights to blogging activity to media events to above-the-line print ads to in-store POS to social media harvesting of consumer insights to complete the process. 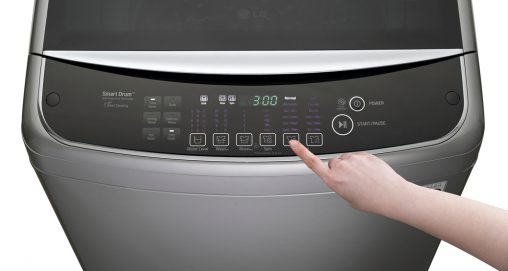 A look at the soft touch control panel on this range.

The SmartWashers’ functionality is predominantly characterised by automatic programs. Users select the desired wash cycle using elegant LED-backlit soft touch controls and then the machine automatically senses the weight to fill with only the required amount of water. There are special settings for sportswear, towels and duvets, and all the automatic programs can be overridden if the user has special needs. The lid softcloses to protect lingering fingers and the door locks when in operation, though the machine can be paused mid-cycle to throw in those misadventuring socks. Should a child become locked inside — and the Direct Drive motor means there is no central agitator, making it an ideal hiding place — Kim assures me that the lid can be pushed up to break the lock with minimal force.

LG’s SmartWasher range comprises five models: three that are generally available an exclusive model each for Harvey Norman and Narta. There are 7.5-, 8.5- and 9.5-kilogram white varieties, with the largest model also available in a stainless steel finish. Prices range from RRP $1,149 for the 7.5-kilogram model to RRP $1,499 for the 9.5-kilogram stainless steel washer.