Retailers may need to lock up their machines if this appliance chief comes to town.

The aggressive culture that underlies the two Korean companies, Samsung and LG Electronics has been overtly on display following the behaviour of Jo Seong-jin, head of LG’s Home Appliance and Air Solution Company. Seong-jin, in a Basil Fawlty moment, beat up a Samsung washer on the sidelines of the IFA trade show in Germany last year.

Samsung, which had CCTV footage allegedly showing Seong-jin “willfully” damaging the appliance earlier this year filed a lawsuit for property damages and defamation against Seong-jin and four other LG executives. They claimed that the LG team intentionally sabotaged the door hinges of one of its washing machines. 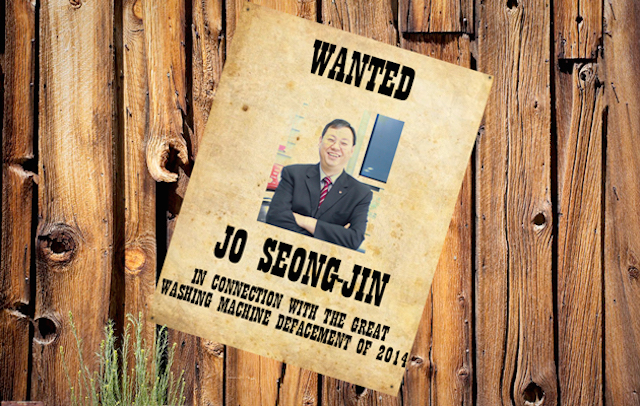 The pending court decision on Seong-jin (Samsung’s legal team wanted a 10 month jail sentence) was threatening his slated appearance at the upcoming Consumer Electronics Show 2015 in Las Vegas. South Korean prosecutors had imposed a travel ban on Jo Seong-jin, however, he was cleared from the charges of vandalising washing machines last week.

While the four other LG executives involved in the investigations had been complying with prosecutors’ summons, Seong-jin has not complied to any of the multiple requests to attend, citing packed schedules due to the year end’s reshuffle and preparing for the upcoming tradeshow.

However, the Seoul Central District Court said on Friday there was not enough evidence to prove that Seong-jin deliberately damaged Samsung’s washers during the industry trade show. The prosecutors, who indicted Seong-jin in February, sought a 10-month jail term for the executive.

Seong-jin’s hubris was unabated by the legal stoush, “I will redouble efforts for technological development to produce more good products that will be loved by customers around the world,” he told reporters following the verdict.

In September 2014, Samsung filed a formal complaint to local prosecutors accusing Seong-jin of deliberately damaging Samsung washers. LG had agreed to pay for what it called accidental damage to four machines, but at the same time derided the quality of its rival’s products, angering Samsung.

The dispute triggered a barrage of public mockery from South Koreans, who chided the firms for escalating what they said was a petty dispute that neither side can gain from.

The two companies eventually agreed in March to drop all legal disputes including the washer spat, but that did not stop the criminal court proceedings.