Sometimes you just get lucky. The national captain scores an innings high 74 in his final knock, securing his adoring nation a fifth World Cup. He walks off to a standing ovation from the biggest cricket crowd ever assembled in Australia: grown men tear up as his raises his bat to the crowd and, later, dedicates the victory to his lost “brother” Phillip Hughes.

Sometimes you just get lucky. LG Electronics’ Australian subsidiary had barely anything to do with the decision to sponsor the ICC World Cup — it was a global partnership between the two behemoth organisations — and yet here is the local chapter, its logo plastered around stadia and on conflutes erected behind trophy presentations, its OLED TVs on loop between overs and its spokes-slogger chipping in with a spirited 45 in the Final.

Sometimes you just get lucky. At the Sydney Cricket Ground this morning (Tuesday 31 March 2015), LG Electronics was able to present not only its outstanding new range of premium TVs, soundbars and the Music Flow Wi-Fi multiroom system but also a slightly ginger but altogether good sport Dave Warner. World Champ David Warner with LG’s Grant Vandenberg at the SCG this morning.

While the cricket has been entertaining for the madding crowds, it has also proved profitable for the Korean company. Sources inside LG tell me that sales are up across the board, year on year, with acceptance of 4K and OLED growing by the day. Comparative growth has been helped by a soft start to 2014, meaning 2015 looks even brighter, but even still, LG is in a good place. In 4K, LG has grown its share to 31 per cent of the market and, overall, LG TV sales make up just over 23 per cent of the value of the market. 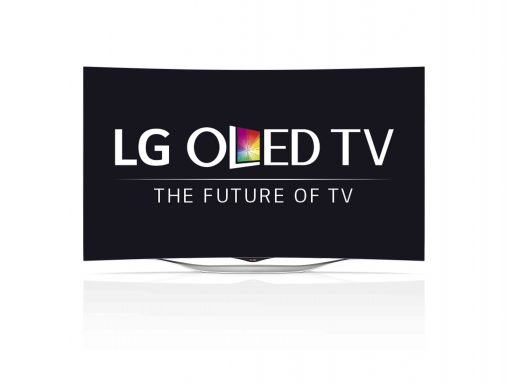 LG is the only extant OLED TV supplier.

As the only brand marketing OLED technology, it carries the burden of educating the consumer-sphere about its features and benefits but it also feels the full benefit of having no competition. Once a customer sees OLED — takes the OLED Challenge in store, as LG says in a spiel worthy of Pepsi — if they are convinced, LG monopolises the sale.

LG’s OLED model is now priced at RRP $3,999 and I’m told Australian sales are now worth $1 million per month, on average. This equates to 250 units sold per month, with sources tell me it is currently on sale at 200 storefronts. Much of this surge came in the past three months, when LG was on TV promoting the technology and, specifically, the 55EC930T; and LG deserves some credit for buying above the line TV media to promote the premium end of this price-erosion affected category.

Despite OLED’s self-evident magnificence, it is not positioned at the flagship of LG’s range. That honour belongs to the Prime 4K Ultra HD LED TVs (UF950T), which are available in 55-, 65- and 79-inch models, for RRP $4,699, $6,499 and $12,999. These TV include ColourPrime technology for a wider gamut, greater image depth and a more vivid display. Brighter lights and darker blacks are achieved by adjusting where the pixels are backlit, a system LG dubs Ultra Luminence Technology. There’s also upscaling for ‘converting’ Full HD content to Ultra HD, Smart TV powered by webOS 2.0 (including Netflix) and Harmon/Kardon sound.

LG marketing manager Grant Vandenberg spoke at length about the arrival of Netflix in Australia. He said LG feels this will change the way Australians consume media, and that LG TVs were paragon for connecting to Netflix and consuming its all-you-can-eat video on demand. Back at CES, I was at LG’s press conference with Netflix chief streaming officer Greg Peters announced that LG was the first TV manufacturer to be certified by Netflix as a Smart TV worthy of its endorsement. It is unsurprising that, locally, LG would form such a close bond with Netflix, considering fierce rival Samsung’s close partnership with Foxtel. “We’re the only manufacturer offering these three technologies to consumers: OLED, 4K Ultra HD and LED/LCD,” Vandenberg said. He could have added Curved for a fourth.

LG will be marketing three Curved 4K TVs, in 55-inch (RRP $3,999), 65-inch (RRP $5,799) and 79-inch flavours (RRP $11,999). These models are all Ultra HD and include all the Smart TV bells and whistles, along with 200-Hertz refresh rates from smooth transition, however, Curved has found itself in a bit of a niche, appealing to a more narrow band of consumers than first imagined. LG is sticking with the form factor and there will be some interest, but it is safe to say it is not revolutionising the market the way some predicted.

For those with tighter budgets, consumers can enter the world of 4K via LG for RRP $1,799 for a 43-inch UF770T model. Not the biggest or most feature packed TV but also those extra pixels — four times the resolution of Full HD — are crammed in.

There will be four key retail partners for LG’s 2015 TV range: Harvey Norman, JB Hi-Fi, The Good Guys and Bing Lee. LG showed me a slide detailing how each model in its 29-strong range. Harveys will have exclusivity on the very niche $40,000 98-inch 4K Ultra HD UB980T panel, while The Good Guys will have all 28 other units. Harvey Norman has got 21 models in toto, JB has 15, and Bing Lee has 22. How much can one read into this distribution strategy? It would seem that considering LG’s growth in the TV category and the money they are investing in marketing the range, a retailer would surely prefer to be stocking the range than not.

Sometimes you just get lucky? LG chops 4K OLED prices here and over there