Hello and welcome to our live blog of Samsung’s press conference, one of many big name presentations on a packed media day here at the 2015 International CES.

The crowd is building nicely in the Mandalay Bay Convention Centre for one of the marquee press conferences of the 2015 International CES: Samsung Electronics. Over the past decade, the Korean company has grown into a global behemoth, dominating sales and mindshare in TVs, smartphones and whitegoods. Later tonight, Samsung CEO and president Boo-Keun Yoon will deliver a keynote address, complementing this presser, and because of this double-billing, expectations are high that Samsung will again deliver an impressive marker for the year ahead.

The stage is currently backlit in Samsung’s distinctive blue, while the text, “Creating Possibilities: Shaping The Future”, flashes on screen.

The media scrum for this presentation is without peer so far at the 2015 International CES; teams of cameramen and audio recorders line the back wall of this cavernous room to record and broadcast every word, gesture, product and ohh-ahh as the conference rolls on… High notes on the piano and swirling stars on the enormous display and Samsung’s CES presser is go! On stage is Tim Baxtor, president and CEO of Samsung North America.

He says Samsung is driven to help make consumers achieve their passions and live smarter. “This strategy has led to a very successful year for Samsung in the US,” he says.

In TV, three pillars underpin Samsung’s success: Ultra HD, content partnerships and Curved. This has led to Samsung claiming 60 per cent of the US Ultra HD market, of which half of all unit sales are in Curved.

“We’re also reaching new heights in home appliances, with breakthroughs like the Water Wall dishwasher,” Baxter says, before noting that Samsung is outperforming the market in appliances, phablets, tablets and smartwatches.

“We are now in our third generation of wearabes and have used these learnings to achieve a 60 per cent market share,” he said.

Baxter claims that one-third of Americans are interested in adopting smart home technology, meaning the Internet of Things represents a real opportunity for growth. Recently acquired subsidiary Smart Things is set to “unlock the power” of the digital technology powering our world, he said. In major appliances, Samsung is continuing with its Chef Collection cooking appliance proposition, with more recipes from partnering chefs to be included on 2015 ovens.

Samsung’s Milk Music streaming service is coming to its TVs while a new service called Milk VR will soon be made available on the Gear VR headset.

“When are the Zombies comes to VR?” Baxter asks.

“We’re not ruling anything out.” replies Alpert in one of the most meaningless on stage Q&As in CES presser history.

Also coming to Milk VR is the NBA, though not much else was revealed about that partnership.

Joe Stinziano is now on stage holding court. “We are the market leader in TV because, simply put, people want to own a Samsung” is his opening gambit. The latest development for Samsung is SUHD, a proprietary technology that creates deeper blacks, superior colour purity and light efficiency.

“Samsung Electronics Australia is able to confirm that the new UHD and SUHD TV ranges announced at CES will be launching in Australia later this year. We will confirm local pricing and availability for each product closer to the local launch.

“We are very excited about our new range of products which will provide Australians amazing picture quality, immersive viewing, and a continually expanding content offering in 2015.

“The new SUHD TVs from Samsung represent an exceptional step forward for our TV range and technology. This is a game changer for the Samsung Smart TV category and we are looking forward to sharing more information about the local range later this year.” Yves Behar, renowned designer of SodaStream appliances, is now on stage to discuss the TV aesthetic, which he says is, “in a way, like art”.

“We designed the SUHD TV around a thin curved blade,” Behar says, comparing the design to that of an easel displaying art. The TV is much wider than conventional for its height: it will be interesting to see if this catches on.

Tizen will be Samsung’s Smart TV backbone in 2015, which can be controlled by voice, gesture and the remote control. This is the same system underpinning Samsung’s smartphone range, so users can seamlessly switch between mobile viewing and TV viewing without missing a beat.

The solution is the Omni-Directional speaker system, which fills a room with sound like a lightbulb. These white speakers look somewhat alien and I will get an image up as soon as possible. 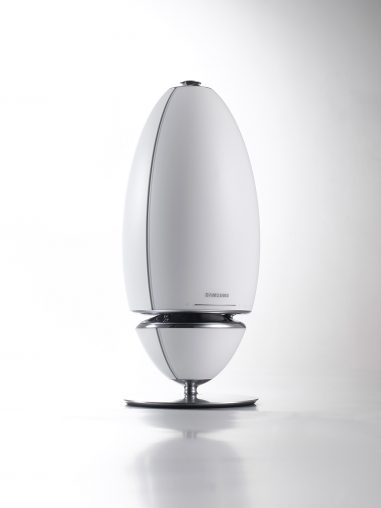 John Herrington is now on stage to talk about home appliances. He starts with a brief overview of 2014, mentioning Chef Collection, Water Wall and the Food Showcase refrigerator range. He says these innovations led to a 10 per cent growth in Samsung’s appliance sales. In 2015, Samsung wants to expand on this, especially in cooking appliances, where Herrington says Samsung has established itself as a premium brand for the discerning renovator. The second phase of the Chef Collection is being launched at CES, with features such as the Virtual Flame to indicate heat intensity on an induction cooker, as well as a new app that will be updated fortnightly with recipes from leading Michelin rated chefs. Also new in the kitchen is a dual door oven called Flex Duo that allows user to cook separate meals in the same oven cavity without any odours spreading between the dishes. This technology was recently honoured with a CES Innovation Award.

In the laundry, Samsung is introducing ‘activewash’, which features a jet injection of water to reduce any pre-washing and a super speed 38 minute mode. And with 60 times more suction power than previous models, Samsung’s new PowerBot robot vacuum is expected to maintain the momentum in floorcare. “Samsung Electronics Australia are able to confirm that the Flex Duo oven range with Dual Door and the Samsung activewash top-loader washing machine will be launching in Australia later this year. We will confirm local pricing and availability for each product closer to local launch.

“Samsung Electronics Australia can confirm that a local variant of the Chef Collection App will be made available to Australian customers in 2015. Further details about the local application’s features and promotional activities announced at CES 2015 will be confirmed closer to the local launch.”