The major brands are in a race against time to clock up sales in this alarming new category! Let’s check out the hottest new smartwatches! Not due out until early 2015 and starting from US $349 (there’s no Australian pricing yet), Apple’s first new product since Steve Jobs’ died is Watch, which is available in basic, sport-specific and fashion-forward flavours. Powered by Google’s Android Wear, this is the beloved Taiwanese PC brand Asus’ first wearable device. It can pair with any smartphone running Android 4.3 or later and it has an elegant, stitched-leather strap. Water resistant for up to 30 minutes in 1 metre of water, LG’s G Watch R has a full circle plastic OLED display, so it more closely resembles traditional watch faces, while still running all compatible apps available in Google Play. In addition to being a wearable device to track daily activities like steps taken, distance covered and calories burned, the TalkBand B1 doubles as a Bluetooth earpiece, so a user’s smartphone never need leave their pockets. 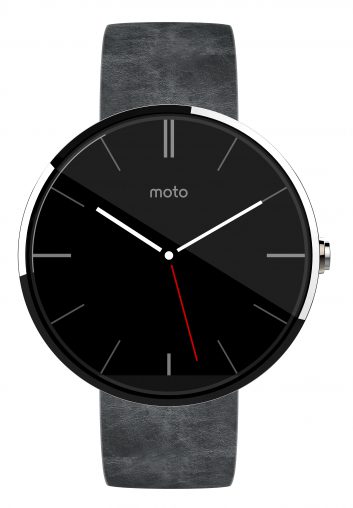 Premium materials have been used to create the classical look of the Moto 360, which quickly sold out in the US after going on sale for US$249. Controlled via speech or the touchscreen, this smartwatch has an all-day battery, a pedometer and a heart rate monitor. It ill be available in Australia from 31 October 2014 at RRP $329. Moto 360 will come in two styles: stainless steel black with black leather band, and stainless steel silver with stone leather band. A steel band version will become available in early 2015, for RRP $359. Fresh off the catwalks of Berlin comes Samsung’s latest Super AMOLED smartwatch. Unlike its rivals, this model is 3G capable, so it can used independently of a smartphone. A micro-keyboard pops up so users can instantly reply to messages, provided their fingers are small enough! Marketed as the most up-to-date with Android Wear watch, Sony’s new model has 4GB of storage, so it can be used as a standalone MP3 player with Bluetooth headphones, in addition to receiving notifications, using fitness applications and telling the time. Arguably the brand that started the smartwatch revolution, Pebble’s current premium model is the Steel, RRP $199, a watch available in Black Matte and Brushed Stainless varieties. The big selling point of this device is that’s compatible with both iOS and Android.