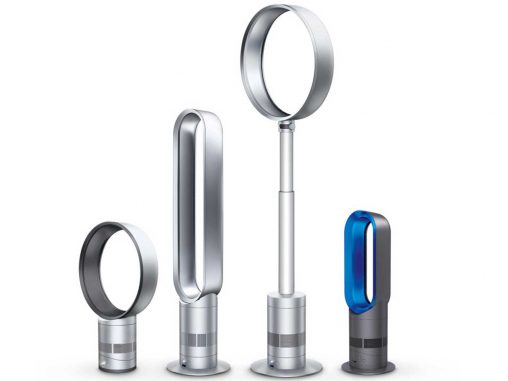 The new Dyson Cool range is rolling out to retail stores this month after an exciting build-up campaign that has included a Best in Category Good Design Award win, recognition from the Noise Abatement Society, a 2-week exclusive online sales period and both above and below the line advertising and marketing.

The most significant new feature of the Cool range, which comprises the AM06/07/08 table, tower and pedestal fans, is a 75 per cent reduction in sound. Many Australians like to direct a fan at them while sleeping during our long and humid summers — it can provide desperate respite from sleeplessness — but the noise emitted from the first batch of Dyson Air Multipliers was a hindrance to this. Those clever engineers at Dyson’s Malsmbury HQ were assigned the task of making a much quieter bladeless fan and they have delivered, though the use of a Helmholtz cavity. Dyson supplied this pic of the Helmholtz cavity.

Hermann von Helmholtz was a Prussian-born renaissance man famous for his work in electrodynamics, philosophy and acoustics. In the 1850s, he created his eponymous Resonator, which is used to measure the pitch and frequency of various sounds. The principals of this invention can be utilised in other devices, such as fans, to reduce noise. Think of sound as being tangible; instead of the whole mass of sound being exhausted by the fan, the noise is separated and reduced inside the Dyson Cool’s base, meaning the new models are much quieter: by 75 per cent, according to the official spiel. A look inside the Dyson Cool AM06.

To further sweeten the deal for nighttime use, Dyson has introduced a Sleep function to its Cool range, so users can set their bladeless fan to automatically turn off, up to nine hours. Another significant change is the user interface: there is no longer a dial for switching the fan on and off and then controlling the force of the fan. There is now just one soft-touch button for controlling power and adjusting airflow and all models come with a magnetic remote control for oscillation, power, airflow and timer settings.

Speaking about its marketing commitment Dyson Australia reported that it, “will be launching Dyson Cool in Australia with a strong integrated marketing campaign which covers TV and digital advertising, a PR program, social media, in-store POS, retail stand activations and consumer events”. This is very good news for appliance retailers, which rely on above the line marketing to motivate interest in new products and technology and to generate foot traffic into stores. These campaigns require a significant investment, often millions of dollars once all creative and media outlays are factored together, so retailers should maximise the opportunity to prominently display available POS and to merchandise appliances being advertised on TV in positions likely to catch the eye. This doesn’t just go for Dyson, but for other appliance brands currently undertaking new campaigns, such as Sunbeam and Haier.