UPDATE: The iPhone 6 and iPhone 6 plus went on sale this morning, here is Appliance Retailer’s wrap of new Apple accessories so retailers can cash in on this opportunity.

Mobile accessory suppliers were quick off the mark to announce new cases and accompaniments for the iPhone 6 and iPhone 6 Plus, but they’ll be facing strong competition from online services that print custom-made cases and sweeten the deal with free delivery.

One such site is Society6, which is offering free delivery worldwide for its iPhone 6 cases that will ship on 19 September. Society6 is an online marketplace that enables artists to make their artwork available for sale on a variety of products such as T-Shirts, posters, pillows, bags and laptop and tablet cases.

With thousands of designs to choose customers can enter wide ranging search terms, from the kind of colour or pattern they want to, TV shows such as Doctor Who or Parks and Recreation, which will yield results. Locally, Dick Smith’s Move stores offer a similar service, allowing customers to design their own smartphone or tablet cases online and have the bespoke tech accessory delivered straight to their home in 3-5 days.

The printing and shipping of Move’s cases is carried out by online business The Dairy, which has confirmed it will begin shipping iPhone 6 cases on 29 September.

The Dairy began business in 2012 with the mission to “rid the world of nude phones and ugly cases, one at a time.” Its philosophy recognises that our devices contain so much of our information and personal stories they have become an extension of ourselves. As such, the case should be just as personal and unique as the digital content.

UPDATED:  Distributed by MacGear, Agent18 has a range of fashion-forward, smartly engineered iPhone 6 and iPhone 6 Plus cases which will be available in Australia from 22 September 2014.

The range comprises of two collections: SlimShield and FlexShield. At just 1 millimetre thick, SlimShield is a slim polycarbonate case that provides impact-resistant protection. The front edge of the SlimShield case extends past the screen to protect it from scratches.

FlexShield has a shock absorbing TPU that wraps around the front of the phone, FlexShield offers screen protection, protection from drops and added grip that is stylishly protective. Prices range from $19.99 to $39.99.

“Demand for the iPhone 6 has been running red hot since launch and OtterBox is excited to now offer trusted and specially designed protection for all new iPhone 6 owners,” says Steve Nisbet, managing director OtterBox Asia Pacific. “OtterBox has been crafting cases for Apple products for over ten years and have engineered the best protection for each device based on customer feedback to enhance experiences each time.” The Otterbox Commuter is a two-piece case featuring a tight-fitting port and plug covers to keep grit and grime out, paired with a stick-on screen protector to block scratches, scuffs and scrapes. Available in a full spectrum of wraparound colours and graphics, the Symmetry Series offers protection, without compromising on style. The Defender Series is a triple-layer, ultra-rugged case with a built-in screen protector, the case also has a protective membrane which covers the Touch ID, blocking debris, dust and grime. It also has a handy belt-clip holster.

UPDATED: Distributed by Scholastic, the Livescribe 3 smartpen is not purely for the iPhone 6, but does make use of the larger screen sizes of the newer iPhone, iPad and iPod touch devices.

“It captures everything written on Livescribe paper as soon as it starts up, and easily transfers that content to Livescribe+ when the app opens. People can write naturally on paper with ink, and save, search and share their notes from their smartphone or tablet later. Users can convert handwriting to digital text to create tasks, reminders, contacts and calendar events.” Griffin Technology has released a line of protective phone cases that are customisable and highly functional for the iPhone 6 and 6 Plus, by updating its best-selling case collections for the new Apple devices. The Griffin Identity cases combine drop protection and self-expression. Identity cases for iPhone 6 will be available in a variety of colors in Performance, Graphite and All Clear models. Users with two or more Identity cases can take advantage of the two-piece design by interchanging back plates and bumpers to create their own new look.

The Griffin Survivor cases all designed to meet or exceed US Department of Defense Standard 810G for shock/drop and vibration. The three new cases — Survivor All-Terrain, Survivor Slim and Survivor Core — will all be available in a variety of colors. Similiarly, Cygnett have adapted its best-selling ranges to fit the new iPhones.

“In addition, we’re adding to the growing range of brightly coloured products with the WorkMate grey, red and blue cases that you can mix or match with our ChargeUp power banks and Source cables,” said founder and managing director of Cygnett, Tim Swann.

The hero of the range is the WorkMate (RRP $29.95) a compact, tri-material protective case, and Cyngett’s most popular series to date. Also announced was the UrbanShield and the Aerogrip both in new different finishes. UPDATED: The iPhone 6 and 6 Plus line up from Speck  includes its iconic CandyShell, CandyShell Inked, CandyShell Grip, and CandyShell Card cases.

CandyShell provides the bulk-free protection for the slimmer new devices. The cases have a raised bezel hugs the iPhone’s new ion-strengthened glass for extra screen protection. It also acts as a buffer between hard surfaces and the newly raised camera lens on both iPhones.

Also accommodating for the larger size of the iPhone 6 and iPhone 6 Plus, the CandyShell Grip case has raised rubber ridges making it easier to keep hold of. Belkin has unveiled a new range of athletic-inspired armbands and advanced screen protection for the iPhone 6 and iPhone 6 Plus. A local range of classic phone cases and folios will also form part of the range and will be announced shortly. Strike have unveiled its Alpha Cradle for Apple iPhone 6 and iPhone 6 Plus, with shipping beginning the same day the iPhones were announced. According to Strike CEO Chris Ryan, the business has been receiving pre-orders for the last 2 months for the iPhone 6 cradle range. The product design engineers also shared that the product has Near Field Communication (NFC) connectivity which was previously only available for Android phones. Strike Alpha cradles are embedded with NFC chips allowing users to automate phone functions.

Following the release of the Strike Alpha iPhone 6 cradle, Strike engineers are now working on iPhone 6 cradles for use with the Official Apple Cases, Otterbox Defender Cases and Lifeproof cases. These will be available sometime in mid September. An iPhone 6 Alpha cradle which comes with a free transparent case is also available for purchase now. The US-based iLuv have a funky range of accessories. Among the new lines is the selfy, iLuv’s latest iPhone case which includes a built-in remote shutter that makes taking pictures with the new iPhones easier.

UPDATED: iLuv’s local distributor PowerMove Distribution has confirmed the iLuv cases will be available in Australia in October 2014. 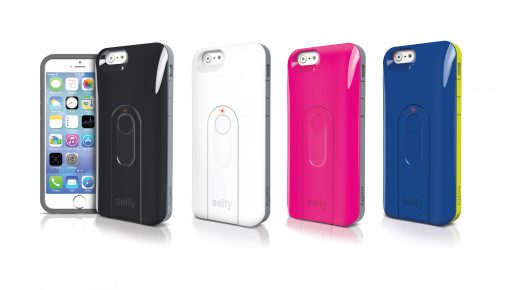 The Selfy Series from iLuv

“The release of the iPhone 6 and iPhone 6 Plus are exciting technological developments for Apple users, and iLuv wants to make sure that their valuable new purchases are well protected,” said Jason Park, marketing manager at iLuv.

“Each accessory in iLuv’s latest line offers superior form and functionality, and is designed to address major needs of typical mobile users. Whether your mobile lifestyle requires that you have additional storage for credit cards, added privacy from the wandering eyes of bystanders, or greater flexibility when snapping photos, iLuv has the perfect solution to meet your needs.” Other iLuv accessories include a Privacy Film Kit which prevents people seeing your screen; while you can still see the contents of your screen, people around you will only see a darkened screen. The TYLT Energi Sliding Power Case for iPhone 6 (RRP $99) and iPhone 6 Plus (price TBC) has an exterior case with a built-in 3,200mAh rechargeable battery that can be removed to reveal a protective TPU-lined inner case. TYLT recently launched a similar power case for the Samsung Galaxy S5; the iPhone 6 version has been improved even further with its larger battery capacity. 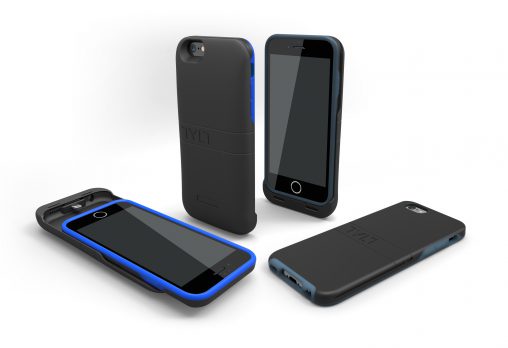 The iLuv Aurora Wave case glows in the dark