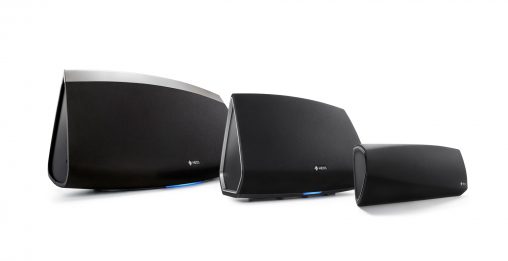 After a decade in development, Denon today revealed plans to launch its new multiroom wireless audio system, called Heos by Denon. Following on from the enormous success of the Sonos system, as well as new entries into the category from Samsung, Pure Jongo and Bose, the Heos by Denon system will be available from the first week September with access to Spotify, Pandora, TuneIn and Deezer at launch, with other music platforms to be added in the months following.

The Heos by Denon service runs from a bespoke app and can stream music to a system comprising three different speaker models, with compatibility for up to 32 speakers. One of the major advantages of this system compared to rivals, according to business manager Joe Salamanca, is that different users in the home can download the Heos app to their mobile devices to control the system. The benefit of this, Salamanca said, is that when using a rating service, such as Pandora, the youngster with good taste can press thumbs up to Ball Park Music and that won’t affect Mum’s playback of Mumford and Sons, who are terrible.

In addition to wireless music streaming from apps on a smartphone or tablet, the Heos by Denon system can be used as a para-home theatre, by connecting a TV into the system via an optical in cable. There is also USB playback from external hard drives and NAS compatibility.

The Heos 3 (RRP $449) can be wall-mounted and positioned either vertically or horizontally. Paired with a second unit, the speakers can be assigned right and left positioning for stereo playback.

A step up at RRP $599 is the Heos 5, which has two tweeters, two mid-woofers and a passive radiator.

The “big kahuna”, according to Salamanca, is the Heos 7 (RRP $899). This model is designed for larger rooms and parties, with two customer tweeters, two mid-woofers, two large radiators and a large sub-woofer.

All three models have USB and auxiliary inputs.

Complementing the three speakers is the Heos Amp (RRP $799) which has Wi-Fi onboard, as well as full range of analogue, optical and digital input and outputs, to transition any existing hi-fi speakers onto the Heos system. Below this model is the Heos Link (RRP $549), which also has the power to bring existing speakers into the system, provided the user already has an amplifier.

The final piece of the Heos hardware puzzle is the Extend (RRP $159), an optional Wi-Fi range extender to fill deadspots and strengthen the home network. “I want to stress that this is not needed,” said Salamanca, making the point that this is only for those needing more coverage and stability.

“This is not just an audio streaming product,” said Salamanca. “It’s made by a company that really cares about audio quality. It has superior acoustic design and audiophile synchronisation that is almost as good as speaker cables.

“The cabinets are really well-constructed and have been designed to have no distortion. They sound great!”

Dual band compatible, Heos plays overs 802.11n Wi-Fi across both 2.4GHz and 5GHz. “If you want the best type of performance, you move to the 5GHz,” Salamanca said.

It has been a circuitous path from genesis to revelation for Heos, taking in New York, Tokyo and Sydney.

Marantz was started in New York by Saul Marantz in 1952. After a successful period growing the brand and broadening its global presence, including the establishment of European manufacturing facilities, Marantz was acquired by Philips in the early 1980s. The Dutch company was looking for an outlet through which to sell high-end CD players. When the need for Marantz lapsed with the emergence of digital technology, the company’s Japanese subsidiary subsumed the whole company.

Marantz then merged with Denon to create a new joint venture and, in 2002, were joined by Boston Acoustics, to create a high-end brand house called D+M Group.

Over many pints at the Pyrmont Bridge Hotel, the Avega team worked to create its own Wi-Fi music streaming speaker system. The company signed licensing deals with Dell and Cisco and went so far as to be nominated for a Best of CES award for one of its earliest models.

In 2010, Avega was sold to Altec Lansing and then in 2012 it was acquired by the D+M Group. Several of the original Avega start-uppers have since moved on but Peter Celinski remains, though he now works in California as D+M’s chief technology officer. Running the D+M’s Sydney Innovation Centre, a fancy name for the Australian head office and home to 17 staffmembers, is MD Anders Brogestam.

The original dream to create a wireless streaming network dates back to those original Avega days 10 years ago and the Heos by Denon ecosystem, which is to be rolled out globally through the end of 2014, is being promoted as ‘Made in Sydney’. The name ‘Heos’ actually means nothing, according to Nick Murrells, director of product marketing for Denon in Australia, who pointed out the majesty of the logo, which creates an ‘H’ from the negative space formed by speaker-esque shapes and ‘Ds’ for Denon.

As is now tradition at launches of multiroom speakers, the comparison with a certain audio palindrome, Sonos, is never far away. Murrells was asked directly what Heos had over Sonos and he replied with three key pillars: Audio Quality (“undisputedly” better), Design (“personal opinion” as to what people will think, though he said they will be drawn to Heos’ “European design aesthetic”) and User Experience (highlighted by the system having multiple profiles for different users and the dynamic adding of features via intermittent firmware updates).

On the flipside, one advantage Sonos has over Heos is that it already works with a much broader selection of content sources, such as Rdio, JB Now and Mog, while the Pure Jongo offer includes a battery-powered portable speaker that can be taken on the road to widen its usability.

Responsibility for the wholesaling of the Heos by Denon system falls to QualiFi, who assumed control of distributing D+M Group products when it completed it asset buy-out of Audio Product Group’s consumer division in July 2013.

QualiFi is owned by Michael Henriksen, who came to Australia from Denmark around the same time that Marantz CD players were first spinning Madonna and Van Halen records. He saw an opportunity to introduce the Australian market to high-end, Scandinavian audio products, and become the local importer for the Audio Pro brand. Henriksen and his wife have grown their importing business, called Qualifi, over the past 30-odd years, adding Austrian brand AKG, German brand Loewe and Danish brand Jamo, along with the three D+M Group brands.

Henriksen said the Heos system would be sold at launch through 20 hand-picked A/V specialists. These dealers got their first taste of the system at a retailer conference in Sydney this week and there will be a further demonstration at the Integrate Expo in Homebush, running 26-to-28 August 2014.

QualiFi has had to go down the path of tight distribution because they are limited by product availability, Henriksen said, and more retailers will be added when manufacturing efficiencies are realised. He said that “distribution of Heos will typically be aligned with Denon” and said the preference was to have one exclusive mass or big box retailer on board, though he did not reveal a preference when asked for more information. An admittedly poor photograph of Nick Murrells demonstrating the Heos by Denon app. A much better image showing what the app looks like on an iPhone. The system also works with Android but not Windows Phone or via a web platform.