Welcome to Influencers, our annual series that speaks with the heads of retailers, suppliers and industry bodies to find out what is happening in appliances and electronics and how different companies are shaping its future.

In our final installment of Influencers for 2014, Appliance Retailer editor Patrick Avenell offers some thoughts on the industry and thanks those who participated.

How has the first half of 2014 been for the industry?

Overall, the industry appears to be cautiously optimistic. The recent result from the publicly listed companies suggests that retailing consumer electronics products is still a profitable venture, although you must be canny in how you approach the market. Retailers with diverse offerings that span bricks and mortar, online, mobile and social, each with an equally valued touchpoint — that is, not giving the physical stores such obvious primacy — will continue to do well. There’s no doubt that having a premium offer that is not so exposed to price sensitive consumers is an advantage. Those playing in the middle of the hourglass — the so-call mass channel — will continue to be squeezed, as best exemplified by the pressure exerted on the two major department store chains. Ultimately, though, I tend to agree with the newly minted owners of David Jones, Woolworth South Africa, who said, “retailing isn’t dead; mediocrity is”.

Looking at the supplier side of the industry, results from the most recent GfK Temax report show an overall revenue decline of 1.9 per cent for the first half of calendar 2014, compared to the year-ago half. The market was worth $8.4 billion during this period, with Telecommunication, IT, major appliances and consumer electronics the biggest contributors. Worryingly, however, only small appliances (+0.6 per cent) and IT (+2.3 per cent) grew in sales value during the first six months of the year, compared to previous corresponding period. All other categories experienced declines, mostly modest, except for the Photo category, which plummeted 18.8 per cent.

What are you predictions for the second half of the year?

Unfortunately, we will most likely still be waiting for the long-awaited recovery in consumer confidence. The repeal of the Carbon Tax has restored some healthiness to the outlook but not even record low interest rates can offset the patently and grossly unfair Federal Budget proposed by Treasurer Joe Hockey. The fear of increased taxes, regardless of the wheedling euphemisms, and reduced services will cause many ordinary Australians, the bread and butter consumer of this industry, to postpone purchasing until they are assured that they can afford the expense.

Despite this grim outlook, I am still a naturally optimistic person, so I will forecast a strong Christmas in certain targeted areas, like coffee machines, headphones, mid-market benchtop appliances and the health and wellbeing category.

What opportunities do you see for the electrical retailing industry?

There is still enormous potential to grow sales and profitability by curating your go-to-market approach to today’s consumer. My friends whinge to me that established retailers don’t have good-enough websites while my Mum’s friends say they never receive decent service when in a physical store. If a retailer doesn’t invest in attracting and servicing the full spectrum of today’s consumers, they will be left with an ever-decreasing niche. If you had to choose one, you’d go with a highly optimised 360-degree omnichannel approach, similar to what Dick Smith is implementing, as as the very least, the younger customer will see more days that the older generations.

What threats are currently present in the industry?

Retailers trying their hand at supplying electrical products, cutting too many corners to hit a certain price and then releasing an appliance that could burn a house down or kill its user. There have been so many product recalls enacted by the major retail chains over the past five years that it has become an epidemic. A quintessential example of short term gain for long term pain, the damage being down by these appalling appliances will reverberate across all brands, and is particularly evident in categories like electric blankets and USB chargers.

What’s your favourite product of 2014 so far?

I don’t want to gazump Appliance Retailer’s Editor’s Picks awards program so I will limit my response to products outside the industry. It’s the Victorianox Carry-On Suitcase (WT 22). Perfectly sized for taking into the cabin and with dedicated pockets for my Mac, iPad and suit, this Arsenal Red suitcase has made my regular travel much more enjoyable. You know the address! Thanks very much to the 31 industry leaders who participated in the 2014 Influencers Series. It has been genuinely gratifying to receive such brilliant support from the industry and it certainly is not taken for granted.

I would also like to thank the behind-the-scenes marketing, communications and public relations staff that helped out in furnishing the information, both internally and in agencies.

There are times when a journalist/editor can be very demanding of PR and marcomms staff and I am guilty of (very occasionally) not giving proper credit to these, for the most part, tireless and helpful staff. Hopefully this rare thanks clouds the memory of any previous criticism!

You can catch up on the Influencers 2014 series by clicking on the links below: 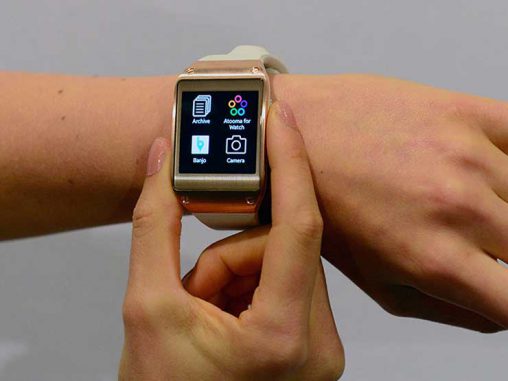